Won Over:
Reflections of a Federal Judge on His Journey from Jim Crow Mississippi

Won Over:
Reflections of a Federal Judge on His Journey from Jim Crow Mississippi 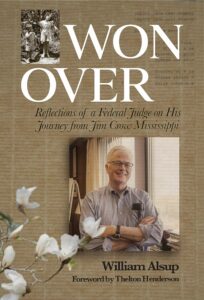 What was it like growing up white in the South at the height of the Civil Rights Movement of the 1950s and ’60s? How did white children reconcile the decency and fairness taught by their parents with the indecency and unfairness of the Mississippi “Way of Life,” the euphemism applied to Jim Crow segregation?

Judge William Alsup discussed the era of the Civil Rights Movement and his new memoir, Won Over: Reflections of a Federal Judge on His Journey from Jim Crow Mississippi. The book traces the influence that drew Judge Alsup from traditional Southern attitudes toward a color-blind ideal. That journey included a personal meeting with the brother of slain Civil Rights leader Medgar Evers; a letter to the editor of a statewide newspaper declaring, “We are for civil rights for Negroes”; and watching Dr. Martin Luther King Jr. speak against discrimination in housing and employment in Chicago. It culminated in his challenge to Mississippi’s college campus speaker ban, which led to the first ever African American speaker on a traditionally white campus in Mississippi.